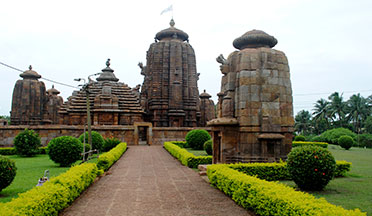 Architecturally, the temples of Bhubaneshwar can be resolved into three broad styles as rekha, pidha and khakhara. Most of the temples of the first two orders have two main components--the sanctum, with a convex curvilinear spire, locally known as the deul, also called bada deul (the big temple) or the rekha deul (temple of which the spire gives the optical impression of one continuous line), which towers over the sanctum having the deity image; and an entrance porch or assembly hall called jagamohana, or pidha deul (a temple of which the root is made up of horizontal platforms or pidhas), characterized by a stepped pyramidal roof.

The bigger temples may have two to three of these porches--usually a nata-mandira (dance hall) and bhoga-mandapa (hall of offering). A khakhara style is distinguished by a barrel elongated roof, called khakhara--the local name of a variety of pumpkin-guard. Over the khakhara are placed kalasas or amlas flanked by lions.

The outside of temples are profusely decorated with sculptured relief broadly classified as - hieratic deities, human beings, geometrical, birds and animals and the floral patterns. The iconography includes the divine images, representation of planets, dikpalas and their female counterparts.

More than 500 temples that remain in Bhubaneswar, some significant, of the early period (7-9th century AD) are the Parasuramesvara and Vaital Deul; the middle period (10-11th century), the temple such as the Muktesvara, the Rajarani and the Lingaraja; and the later period (12-13th century), the Ananta Vasudeva, the Meghesvara and the Yamesvara, are architecturally typical and impressive. Most of these are active places of worship.