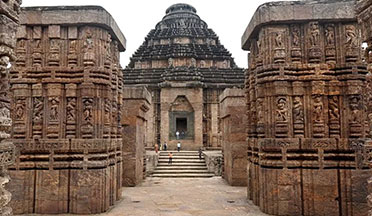 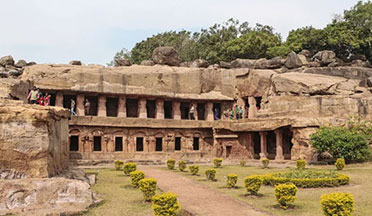 Monuments in Odisha (Orissa) - Between the 7th and the 13th century AD, architecture in Odisha (Orissa) thrived under the patronage of the Ganga dynasty. The Kalinga School of Architecture is believed to have had its origins during this period, which follows a strict code laid down by ancient religious texts.

Most of the monuments in Odisha (Orissa) that remain today are large temple complexes dedicated to a presiding deity, with the construction of the temple parts likened to a human body. The rekha deul or curvilinear spire resting on a square base is unique to Odisha (Orissa)'s monuments, while the interior chamber or the "garba griha" is dark and built to allow only a glimpse of the deity. The spires are adorned with symbols of virtue and immortality.

The monuments in Odisha (Orissa) provided for worshippers in a separate square shaped porch called the "Jaganmohan" to congregate and await their turn to pay their respects to the deity. A pyramidal roof marks the architecture of the "Jagmohan", and is supported by either pillars or pilasters on the inner walls. A walled courtyard enclosed the temple complex. The carvings on the temple range from figures of Gods, to planets, to human forms, flora and fauna, military and court life. The lion gates to the temple are another characteristic feature of Odisha (Orissa)'s monuments.

The rigidity of Odisha (Orissa)'s temple architecture relaxed during the Ganga rule, as the "Natya mandir" or the dancing hall, and the "bhoga mandapa" or the hall of the offering were added. Similarly, more layers to the roof were added and plinths raised. The Lingaraj temple and the Mukteswar temple in Bhubaneswar, the Sun Temple at Konark, and the Jagannath Temple in Puri are some of the monuments in Odisha (Orissa) built in accordance with the Kalinga School of architecture.

The Vaital Temple in Bhubaneswar reflects a different architectural theme, with a semi-cylindrical roof and a lopsided boat shape defining the tower. This and the Varahi temple at Chaurasi with its barrel shaped tower bear the influence of the Shakti Cult. The Tantric influence on some of the monuments in Odisha (Orissa) is seen in the circular design, sometimes roofless, and enshrining the images of Bhairav and the yoginis.

Rock art of prehistoric times has been excavated in Vikramkhol in Jharsuguda. The rock caves, home to prehistoric man, were decorated with engravings and paintings of geometrical forms of humans and animals. Similar caves are found in Sundergarh, Sambalpur, and Kalahandi.

In Dhauli, Jaugad, and Sisupalgarh, the rock edicts demonstrate the highly evolved sculptural skills of Odisha (Orissa) 2000 years ago.

In the first century BC, rock caves were carved out to accommodate Jain ascetics under the Kharavel(Chedi) dynasty. The Khandagiri and Udaygiri caves display highly aesthetic wall panels depicting contemporary life. In Puri, Keonjhar, Balasore, and Koraput, caves have been unearthed with figures of Jain Tirthankaras and Sasanadevas and their emblems. Some of the cells have pillared verandahs circling them.

While Buddhism was followed by the people of Odisha (Orissa) ever since its origins as a religion, it took a new turn after King Ashoka adopted its tenets after the Kalinga war. Between 261 BC to the 12th century AD, Buddhist art flourished, and sculptures of the Bodhisatva and Avalokiteswara abound in Lalitgiri, Udayagiri, and Ratnagiri.