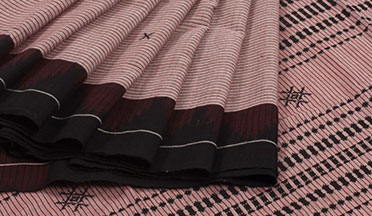 Textiles of Odisha (Orissa) - The distinctive hand-woven textiles of Odisha (Orissa) in unusual patterns and vibrant colors have supported a thriving cottage industry employing thousands. Odisha (Orissa) is famous for its silk ikat weaves created by an intricate process called the "bandha" in which warp and weft threads are tie-dyed to produce the pattern on the loom while weaving. Typical design motifs include rows of birds and animals, fish, seashells, rudraksha beads, and temple spires.

Sambalpur, Berhampur, Mayurbhanj, and Nuapatna produce a striking range in tassar silk with a brilliance, glaze and texture that is unmatched. The rare silk fabric produced at Nuapatna in Cuttack district embellished with verses from the Gitagovinda is used to dress the idols at the Jagannath Temple. The masters are well versed with the centuries-old art of silkworm cultivation and create silk ties, stoles, furnishings and dress materials apart from saris.

The Berhampur Pata are heavy silk sarees with narrow borders, generally woven without any intricate motifs.

The Saktapar sari, from the weaving, looms of Sambalpur, Bargarh, and Sonepur are identifiable by the double ikat checkerboard pattern (passapalli) and brocade border. The weaving arts of Sambalpur-Sonepur and Nuapatna have greatly influenced each other.

The Bomkai cotton saris from Ganjam district, named after a tribal village, have been influenced by tribal art, and are embroidered with temple spire patterns on the border.

The other typical varieties of Odisha (Orissa) saris, in silk and cotton, include the glossy Khanduas having elaborate designs, the rich red jotai ikat with rows of stylized trees and temple spires on the borders, the unbleached cotton kotpad from Koraput offset by a vibrant red-dyed border, the Taraballi, and the Bichitrapuri. The tribal people of the State also excel in producing textiles of myriad hues using vegetable dyes.

Most of the handloom textiles of Odisha (Orissa) are woven in bright and strong colors. Vegetable-dyed textiles have given way to chemical dyes, and the former command a premium wherever available.