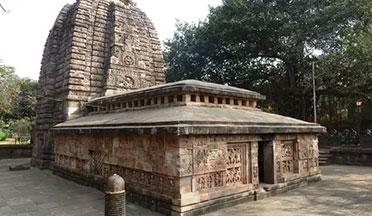 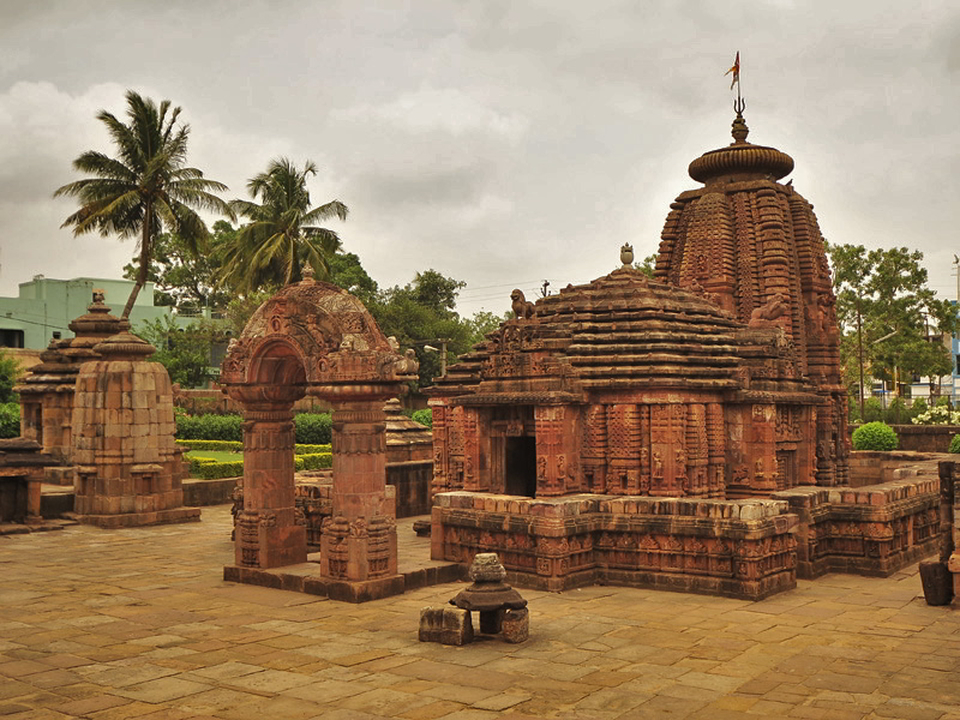 Built in the 7th century, the Parasurameswar Temple is small but lavishly decorated. Enclosed within a compound wall, the deul, facing the West is a square towered, while the jagamohana, instead of being a stepped pyramid, is a rectangular structure with a terraced roof, sloping in two stages. The deul about 13m high has no platform and is triratha on plan, a dominant style of the early periods. The temple typifies the stage of Saiva Pasupata Sect, illustrated by the frequent representation of Lakulisa. He is sculpted in Buddha-like form, with four disciples at his feet as shown on the last side of the tower, while on the West, above the relief of Nataraja, he looks like the meditating Buddha. The varandah has projecting moulding topped by a recessed frieze, demarcating bada from the gandi, a feature not found in later temples. The frieze has mostly amorous couples, separated by paneled jalis vidalas (a rampant lion, with head swung backwards, springing over a crouching elephant) at corners, a very typical symbol the beleaguered Buddhist faith.

The jagamohana, adjoining the square towered shrine has an additional doorway on the South and four latticed windows, one each on the North and South and two on the West, the last, decorated with wonderfully animated bands of dancers and musicians. The recurring motif is the highly-ornate chaitya-window, very often filled with animal, human and divine figures, the last including busts of Shiva. The main entrance to jagamohana also has a fine carving of domestic elephants capturing wild ones, to the left of the lintel. Set into the outer walls of the shrine, sculptures are scenes from mythological narratives, forming a repertoire of Saiva myths, among them the highlights are-on the South of the sanctuary, at eye level in the middle of tower, a superb four armed pot bellied Ganesha seated on a simhasana, with his trunk touching a bowl of laddus (balls of sweetmeat) held in his lower left hand, while his upper left holds a parasu (hatchet); Karttikeya in the Southern niche is with a peacock, holding a spear in his left hand and a fruit in his right; the lintel above this niche illustrates the marriage of Shiva and Parvati; to their right are Agni (fire), the kneeling figure of Brahma and next to Brahma is Surya.

Among the notable friezes that line the North wall of the jagamohana are-sapta matrikas (seven mother goddesses), with Chamunda (Shiva's consort goddess Durga in her terrifying aspect); Ganesha having a human visage face with a trunk growing from his chin; and several deities of the Brahmanical pantheon. The temple is dedicated to Shiva, only two of the three original deities survive. The Sahasralingam, in the far corner of the courtyard, decorated with a thousand miniature versions of itself.