Durga Puja Odisha (Orissa) - Durga Puja, a popular festival, is celebrated to worship the Goddess of Power and War, the Goddess Durga and celebrate Naari-shakti (women power). The festival takes place in the month of Aswin or Kartik i.e. September or October every year according to the English calendar. During this Hindu festival, devotees totally immerse themselves in Durga puja festivity for ten days. This festival truly symbolizes the triumph of good over evil.

This famous festival is celebrated in two different ways in Odisha i.e, in Shakti Peethas and in sarvajanik (public) pandals. In Shakti Peethas (temples of the Goddess Durga), the Durga Puja is observed with complete rituals for about ten to sixteen days known as Shodasa Upachara/Shohala dinatmaka, which starts seven days earlier to Mahalaya called as Mulastami and ends on Vijayadashami or Dussehra, the tenth day. All through the ten days of celebration, the festive spirit totally engulfs people as the idol of ten-armed, fierce Goddess Durga is established in the well-decorated puja pandals (temporary sheds). Goddess Durga is also worshipped by devotees in various pandals as different deities across the state. A pandal in Odisha is called a Medho. For many years, the most expensive installation was the 'Chaandi Merrha' (chaandi means metal silver) of Choudhuri Bazaar area pandal of Cuttack. The ornamentation of this idol was done entirely in silver which made it look absolutely divine and beautiful. However, it is now known as Suna Medho (Suna means metal gold) as ornamentation here is now done in gold plating.

Made up of clay, the idol of the Goddess is lavishly decorated with beautiful and fragrant flowers, embellished with immaculate pieces and bright lights. The idol shows the Goddess Durga seated on a huge lion and slaying the 'buffalo demon' right beneath her feet depicting the power that the Goddess possesses. These ten days of festivities are a grand affair when the 'pujari' or the temple priest sings devotional songs and chants powerful mantras to praise the valor and pure bravery of the Goddess, at dawn and dusk every day. Fresh flowers are offered to Goddess Durga every day. The sweet aroma of incense sticks adds to the charm and sweetness of this festival. Loud music is played in the background when the idol of Goddess Durga is immersed in the nearest river. All devotees seek the blessings of Goddess Durga during this process. Durga puja is a traditional festival and extremely revered time for women who enjoy shopping, pandal hopping and meeting family and friends. They actively participate in the Sindoor (vermilion) khela when women smear Goddess Durga with loads of vermilion on a departing day. It represents rich art, culture and, a heritage of Odisha.

Highlights of the Festival 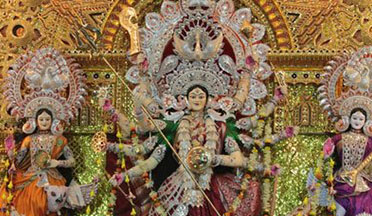 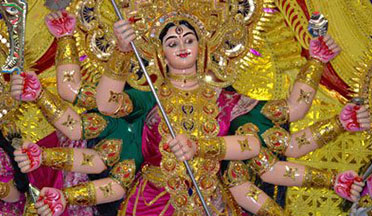