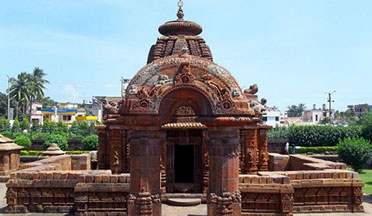 An important landmark to the architectural development in Odisha (Orissa), the Mukteswar Temple is often described as one of jewels of Odisha (Orissa) for its exquisite sculptures and elegant looks. The plan is now a full fledged five sectioned form, pancharatha and the platform or the pabhaga consists of five mouldings, as in latter temples.

The element still common with early temples, like Parasuramesvara and Vaital Deul, is the tryangabada, three-fold horizontal division of the lower story. The new, more elaborate style has absence of dopichha lions, squat figures supporting the amla, the recessed sections but now rounded sharp edges and corners got predominant.

The jagamohana of this late 10th century temple is now a pidha deul with decorated ceiling, carved into a lotus with eight petals. The change in iconography is equally noticeable with Ketu introduced as the 9th planet, the association Karttikeya with the cock and the appearance of the mouse as the mount of Ganesha.

The diamond shaped latticed windows in the North and South walls of Jagamohana depict enchanting scenes of frolicking monkeys. The chaitya-windows carved on the sanctuary tower show an arresting ornamental design, bho, a motif-the grinning face of a lion with beaded tassels emerging from its mouth, flanked by two dwarves, the pattern resembling a coat of arms.

The corner rathas are relieved with female figures, remarkable for their expressive faces, with hair styles and jewellery shown in exquisite detail. The octagonal wall enclosing the temple has several niches, each containing a wheel, a lotus medallion or a delicate scroll.

The decorated torana archway in front of the Jagamohana is a masterpiece dating from about 900 AD. It is a detached portal consisting of two pillars supporting an arch within a semicircular shaped pediment. The decoration of the arch, with languorously reclining females and bands of delicate scroll-work, is the most striking feature.

A small well, locally known as Marichi Kund, lies immediately beyond the sinister of the enclosure, the water of which is believed to cure infertility of women. On the door frame of the well is a seated figure of Lakulisa, surrounded by four disciples.

Situated on the northwest corner of the enclosure of Mukteswar Temple is a latter unfinished, Siddhesvara Temple, in which the emergence of the Orissan architectural style is almost complex. The deul is pancha ratha on plan, the bada is panchanga, and the bandana composed of three moulding dividing janga into tala and upara and the amla on the top of the deul is supported by four squatting figures. The jangha of the jagamohana is relieved with pidha-mundis. Devoid of ornamentation, the deities of Shiva's sons-Ganesha and Karttikeya around the tower are its only interesting points.

The late 10th century Gauri Temple, to the South is a specimen of the Khakhara form but has striking similarities with Mukteswar Temple in respect of execution of its architectural elements and the decorative details. Though substantially repaired and renovated, it still has some notable original sculptures.

Of the few intact figures of nayikas in various flexuous poses, the one, on the South face of the East projection, leaning against a post on which is perched a bird, and the other, on the West projection, taking off her anklets, are noted for their mastery treatment.

The temples described above form the compact central group and are located just off Lewis Road in the older southern part of the Bhubaneswar City. The following temples of the eastern group are more scattered and located about 10-15 minutes walk from Mukteswar Temple around Tankapani Road.