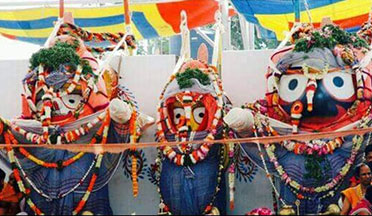 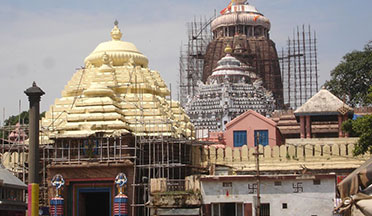 Belonging to the 11th century and enjoying the honor of being one of the 'char dhams', the pilgrimage that every Hindu intend to visit; Jagannath Temple is the honor of Puri and Odisha (Orissa). The holy sight of Lord Jagannath, accompanied by Subhadra and Balabhadra raises loads of joy among the devotees. The two gods and the goddess of the temple are ornamented in accordance with the occasion and seasonal change. The structural design of the temple can be found to be in pyramid shape.

You would be excited to know that the Jagannath Temple of Puri has a latent legend associated with it. It is believed that in the Krita Yuga, the actual image of the lord had the power of granting 'moksha' to anyone who witnessed it. Yamaraja didn't find this justice. So, he decided to keep the image in some distant and unknown corner of the earth. However, as Dvapar Yuga arrived, the idol that is worshipped today in Jagannath Puri was constructed by Lord Vishnu with the help of wooden logs. And it doesn't make difference in the Lord’s power in spite of having the hands lacking.

Jagannath Temple in Odisha (Orissa) consists of four entrance gates. They are named as Singhadwara, Ashwadwara, Hathidwara and Vyaghradwara and these names refer to lion, horse, elephant and tiger. Each day, the Lord at the Jagannath Temple is offered 'bhoga' six times and it is dispensed among the worshippers close to Ratnavedi.

Now, you must be aspiring to know more about the temple and Jagannath Puri. So, don't wait more to visiting this place. Immediately book a tour package for Odisha (Orissa) and explore various other attractions of Odisha (Orissa).