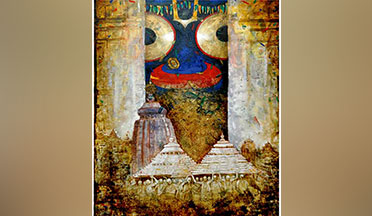 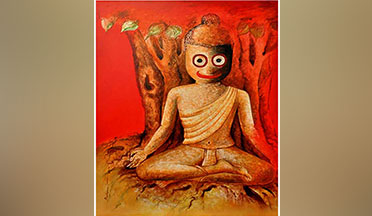 The findings of rock paintings and pictographic writings in the Western part of Odisha (Orissa), Vikramkhol in Jharsuguda, Manikmada and Ushakothi in Sundergarh, Gudahandi in Kalahandi and Jogimath in Nuapada district indicate the existence of prehistoric art in Odisha (Orissa).

The paintings range from small geometrical and floral patterns to big animal motifs and human figures are shown hunting, fighting, dancing and doing domestic chores. Most of the walls follow a sequential, horizontal pattern. Colors used are red extracted from iron, brown from copper and white from lime compounds. The characters of the pictographic writings appear to be a mix derived from Mohanzdaro and Brahmi scripts. The Ravana Chhata Rock at Sitabinji in Keonjhar district contains a painting of very high order, depicting the procession scene of a king riding a caparisoned elephant with soldiers holding shafts and banners, followed by a female attendant. This painting carries reminiscence of Ajanta murals. Splendid murals adorn the inside of the Jagannath Temple, the Buddha Vijay painting in the Jaganmohan of the Lakshmi Temple and the Kanchi Vijay in the Jaganmohan of the Jagannath temple.

Patachitras - The tribal, the folk and the classical are the three streams of the Orissan School of Painting. The classical Orissan painting, Patta Chitra is painted on a specially prepared cloth (Patta), coated with earth to stiffen it and finally finished with lacquer after painting, producing motifs in vibrant colours. Pattas are now used as wall hangings. The subject matter of patta paintings is closely connected with the Jagannath cult and the episodes from Ram and Krishna life. Pattas showing in scenes of Rasa Lila, Vastra Haran, Kaliya Dalan images of Lord Jagannath musical themes of eroticism, nature and wildlife and sets of ganjapa cards, small circular cards made in sets of 96 discs, executed in vigorous folk style are special. The traditional chitrakars (painters) have the honour of painting the Puri temple deities and their chariots (cars) every year.

Palm leaves (Chitra pothi) have long been used as writing materials. An exclusive indigenous tradition of Odisha (Orissa), the craft of palm leaf manuscripts dates back to the medieval period. With the help of an iron pen orstylus (lohankantaka), the artist first inscribes the text or design on the surface of palm leaves, then applies a paste of tamarind seed, oil and charcoal. When the residue is rubbed off, the groove stands out distinctly. Usually, the legends of the Mahabharat and Ramayan, images of gods and goddess, nature and wildlife themes are presented. The visual effects are enhanced using vibrant vegetable and mineral colours. Romantic figures drawn on small leaves now serve as bookmarks, greeting cards and playing cards. Of late, the traditional artists clustered in the village of Raghurajpur, about 50 km from Bhubaneswar have revived this art from.

Originally, Pattachitra artists were settled by the Gajapati King of Puri to paint divine trinity on specially treated clothes to be hung inside the sanctum of Jagannath Temple for the darshan of devotees during Anavasar (retirement in seclusion) when the Lord steps out of the temple along with brother Balabhadra and sister Subhadra to mingle with the masses, the occasion of annual Rath Yatra. Originating from this tradition, this art developed and gained popularity.

The village of Dandasahi near Raghurajpur has been identified as another centre. Ananta Moharana and his son Panu Moharana together have added some new elements to Patta paintings.

Odisha (Orissa) Tribal Paintings - The tribal paintings are intimately related to their religious beliefs and drawn to appease their deities. Idital is the ethnic painting of the Saora tribe usually depicting every day like along -with the concepts of retribution, punishment and rewards. The Saora artists use right-angled triangles to cast the anthropocentric world in different moods and emotions. The Kondhs paint the walls of their houses with geometric patterns, called Manji Gunda while the Santal paint the figurative designs. Wall paintings of PaudiBhuyan reflect about agriculture whereas the wall paintings of Juang include animals, birds and flowers.