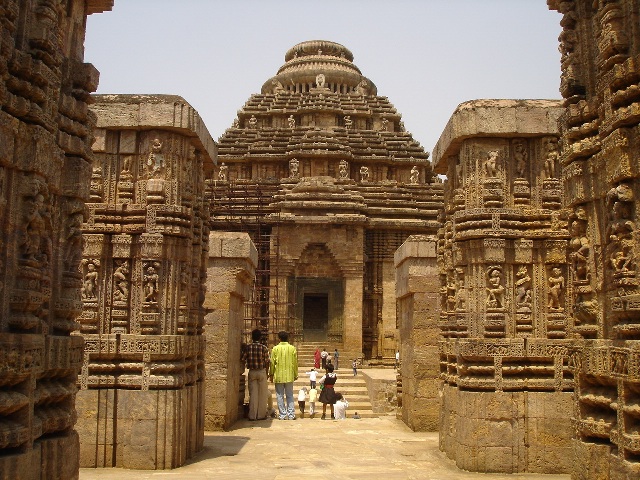 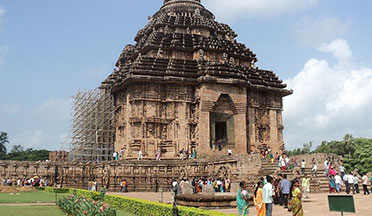 The Konark Temple also called Black Pagoda of Odisha is a 13th century Hindu temple dedicated to Lord Sun. Shaped like a giant chariot, the temple is known for its exquisite stone carvings that cover the entire structure. This most popular tourist destination has been a World Heritage Site since 1984.

History of the Sun Temple

The Sun temple of Konark was built in 1250 AD by the East Ganga king Narsimhadeva. It was built to commemorate military success against Muslim invaders. As per local legend, the temple has a great aura of power that comes from two very powerful magnets said to have been built into the tower-magnets that allowed the king's throne to hover in mid-air. European mariners sailing off the coast used the temple's tower for navigation, but dubbed it the Black Pagoda for the frequent shipwrecks that occurred along the coast. They attributed the disasters to the legendary magnets' effect on the tidal pattern. Konarak was sacked by the Muslim Yavana army in the 15th century. The central statue enshrined in the temple was smuggled away to Puri by priests, but the Sun Temple was badly damaged in the attack.

Fall of the Konark Sun Temple

Many theories explain the fall of the temple in many ways:According to one theory, part of the Konark temple collapsed because of its incomplete structure. The Konark Sum Temple was not completed because of the early death of the king Langula Narasimha Dev who initiated the construction of the temple.Next is the theory of lodestone (piece of the mineral magnetite that is naturally magnetized) located at the top of the temple. The lodestone’s placement caused a huge damage to the temple as many vessels passing through the Konark Sea were attracted towards it. Also, this magnet used to disturb the compass of almost all the ships in the sea. So, to remove the cause of the trouble, Portuguese voyagers stole the lodestone. The displacement of the lodestone led to total imbalance and so the Konark temple fell down. But there is no historical record either of this event or presence of such a great lodestone at Konark.As per another very popular theory, the temple was destroyed by Kalapahad (Kalapahad was the title given to a Muslim governor Sultan Sulaiman Karrani of Bengal) who invaded Odisha in 1508. He had also destroyed many other Hindu temples in Odisha along with the Konark Sun Temple. In 1568, Muslims started ruling Odisha and destroyed many Hindu temples.

How to Reach Konark Sun Temple?

Bhubaneswar airport is the nearest airport that is well linked and has regular flights from all parts of the country. This airport is at a distance of 64 km from Konark.

The closest railway stations to Konark are there in the twin cities of Puri and Bhubaneswar.

Konark is well connected to all the major parts of India by road, rail as well as air.