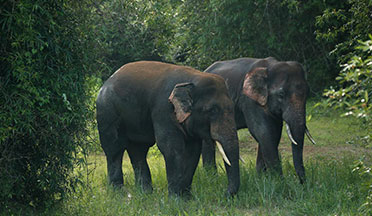 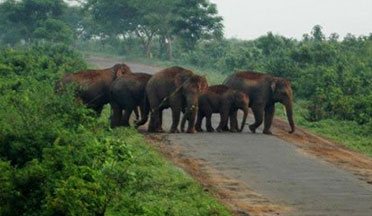 Chandaka Elephant Reserve - 193 sq. km of the Chandaka forest on the outskirts of Bhubaneswar in the Khurda Uplands was designated as an Elephant Reserve in August 1982. The Sanctuary was marked out to check and restore the depleting forest cover which once covered Bhubaneswar. Conservation management techniques over the last two decades have revived the natural vegetation of the designated area which now supports a variety of wild life.

From a bushy cover that characterized the landscape before 1982, the diversity of flora today ranges from the semi-evergreen to the moist kangada forests, coastal sal forest, thorny bamboo brakes, planted teak, and eupatorium scrub. There is a suffusion of medicinal plants and bamboo plants, with a few orchid species also thrive in the wet and shady areas of the reserve.

Among the fauna about 30 species of mammals, 27 species of reptiles and 120 species of birds can be sighted. Besides the elephant, leopard, chital, barking deer, mouse deer, langur, rhesus monkey, mongoose, sloth bear, wolf and hyena also inhabit the sanctuary. A variety of snakes, like the python, and the monitor lizard can also be sighted there. Mugger crocodiles have adapted to large water bodies within the sanctuary. Come July, and water birds, mainly storks, heron, egrets and cormorants can be observed.

The forest supports a thriving birdlife, with the Kamarkhunti reservoir being a breeding ground for the Garganey and common teal, pintail, white-eyed Pochard and spot-billed Duck, among others.

The watchtowers at Kochilaberana, Pitagodia, and Charichhak afford an excellent view of the wildlife in the sanctuary. One of the watchtowers enables tourists to capture the pachyderm's movements during the late evening hours.

The revived Chandaka forest reserve is popular amongst eco-tourists and nature researchers.