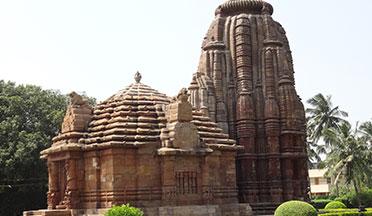 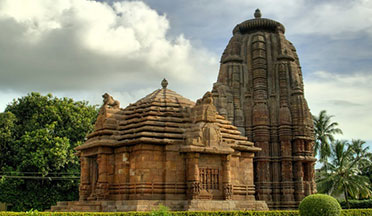 Set amidst the well maintained gardens, the 11th century Rajarani Temple is famous for its sculpted figures and the successive tiers of projections rising to form its 18 m tower. The accentuating miniature replicas of itself decorate the spire, reminiscent of the temples of Khajuraho. It has a square sanctuary and its interior and exterior surfaces are so recessed that it appears circular. The ornamental deul stands diagonal to the severely plain jagamohana.

The highlight of the temple is the fine sculptures of dikpalas or guardians of the eight directions carved around the shrine. Dressed in diaphanous drapery they stand on lotuses, with their mounts below. Starting from East we encounter successively-Indra (lord of the East) holding a thunderbolt and an elephant goad, with the elephant below; the potbellied and beared Agni (southeast), god of fire, with the ram; Yama (South) holding a staff and a noose, with his vehicle the buffalo; Nirriti (southwest), the god of misery, holds a severed head and a sword above a prostrate figure; Varuna (West) holding a noose in his left hand, his vehicle is makara or the crocodile; Vayu (northwest) holding a banner and his vehicle is deer; Kubera (North) placed above seven jars of gems, he has a horse and Isana (northeast) shown with an erect phallus by the side of an emaciated figure. Of these the Agni and the Varuna are particularly impressive.

The Rajarani temple is also famous for the tall and slender nayikas (temple figures) carved in high relief on the walls-figures in amorous dalliance and in such acts as fondling her child, looking into the mirror, taking off her anklet, caressing the bird, playing instrument, holding branches of trees etc.

The Rajarani takes its name from the local sandstone used to built it. The temple no longer has an image of the deity in the sanctuary but its strong Saiva associations are testified from the figures of Shiva and his consort Parvati on the platform and Saiva doorkeepers.