Every year in the month of June or July, this festival is celebrated on the second day of the Shukla Paksha, Ashadh month as per the traditional Odia calendar. It is considered most auspicious to visit the temple during this period. The festival in Odisha is celebrated for nine days, the commencement of this festival is called the Rath Yatra and the return journey on a ninth day is called as Bahuda Jatra. During the return journey (Bahuda Jatra) of Ratha yatra festival, the chariot of Lord Jagannath stops at Mausi Maa temple (Lord Jagannath's Aunt) and the deity is offered his favorite Poda Pitha, a kind of baked cake meant for the poor. As part of Ratha Yatra, the deities of Lord Jagannath, his elder brother Lord Balabhadra and younger sister Devi Subhadra are moved from their holy abode for a procession up to Gundicha Temple.

The three chariots of Balabhadra, Subhadra and Jagannatha are newly constructed every year with wood of specified trees like phassi, dhausa, etc. They are customarily brought from the ex-princely state of Dasapalla by a specialist team of carpenters who have hereditary rights and privileges for the same. The logs are traditionally set afloat as rafts in the river Mahanadi. These are collected near Puri and then transported by road.

The construction of Chariots starts with Chandana Yatra. Carpenters called as Maharana undertake the construction of these chariots, which is their hereditary right since ages. After the construction, decoration starts with different color clothes. Lord Jagannath's Chariot is called as Nandighosa which is 45.6 feet high with 18 wheels, Lord Balabhadra's chariot is called as Taladhwaja which is 45 feet high with 16 wheels and Devi Subhadra's chariot is called as Dwarapadalan, which is 44.6 feet high with 14 wheels. The three chariots are taken out onto the streets of Puri in the afternoon and that is when the traditional Hindu festival Yatra begins. All three chariots are pulled by the devotees with the help of ropes up to Gundicha temple which is just two km away from the Puri Jagannath temple. This festival showcases the art and culture of Puri as well as of Odisha as a whole. Many cultural activities are organized as part of this festival. Getting a chance to pull the chariots is considered to be a good omen and is considered to bring a lot of luck and prosperity to people’s lives. 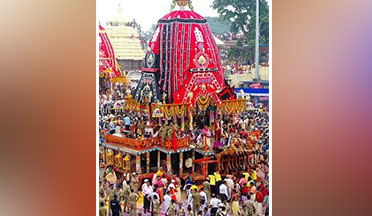 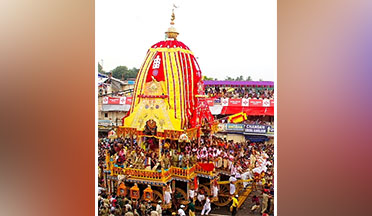 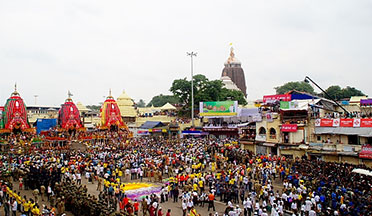 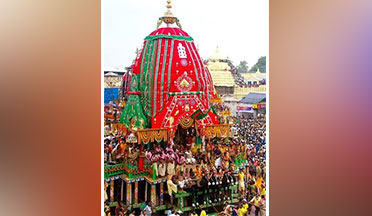